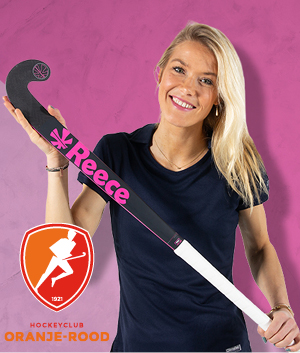 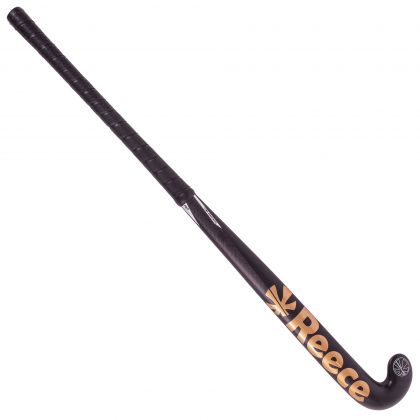 Hockeystick on the picture:
Pro 190 Skill Limited
(No longer available)

Why and when did you decide to become a hockey player?
At young age I participated in many sports, tennis, hockey, horse riding, sailing, etc. But what I liked in hockey is that I played in a team with my friends. Soon I noticed that I had some talent and scored a lot so after that every weekend was a party!

Which qualities make you a good player?
I am a fighter and will never give up. In addition, I'm an attacker so my explosive speed comes in handy. I have feel for the goal and know how to put an opponent under pressure.

What is your favorite exercise during your training?
Strikers practice. Sometimes we get specific exercises for strikers. Four balls are thrown into the circle in a short period of time. From there, you have to shoot immediately. This way you learn to anticipate the ball quickly. I like the hitting and being active.

What is your favorite hockey stick and why?
My ideal hockey stick is the stick I play now. This is the RX 120 SKILL, a lightweight stick that has the center of gravity in the curl so that you can hit hard. It is wonderful to play with. I also love that Reece designed it for me, with my club colours and my name on it.

From which hockey player did you learn the most?
I've learned from every coach or player over the years. At Den Bosch I learn a lot of players from the Dutch team but also from my coaches. And in the national youth selection, I've learned a lot on both a mental and practical level.

Do you have any rituals before an important game and if so, what are they?
I do not have a particular ritual. However, I always get up around the same time, I take the time to have a good breakfast with a cup of coffee and I read the news online on my laptop with some nice background music. As soon as I'm at the club I'm talking to my teammates and as soon as we're in the locker room, I start to focus on the game and get really excited to start!

What do you like to do in your spare time?
Next to all the training and my study, I think it's important to see my girlfriends a lot. We like to go to the cinema or have dinner to relax. I'm studying Law and I'm going to start with an internship soon so I'll be even busier then!

What is the most memorable moment in your career so far?
Winning the national championships last season and playing the European Cup with my club Den Bosch were quite nice moments. I also scored during the play offs in the semi-finals. And with the Young National Team we won gold in Belgium, which is also a great memory.

What is your most important goal at this moment?
I had a number of injuries last year, including a broken ankle. It took a while before I could find my old rhythm. I hope I can play for the Dutch team at some point. But the most important thing is to enjoy playing. Then the rest will come!

Do you have any ideas about your life after hockey?
As I said before, I study Law. After hockey, I would like to be working in law. I have no idea what specific jurisdiction I want to target, but I'll have time for that!

Which hockey player do you admire and why is that?
My teammate Lidewij Welten is such a brilliant player. She is also a striker and was chosen as the best hockey player of the world last year. I learn a lot of her. She uses her speed at the right moments and she is very handy with the ball, making it unpredictable for a defender.

What would be your best advice for young hockey players?
Enjoy the sport and work together for a purpose. There is nothing more beautiful than having the chance to practice your passion every day. Work hard and make it fun, then the rest will follow.