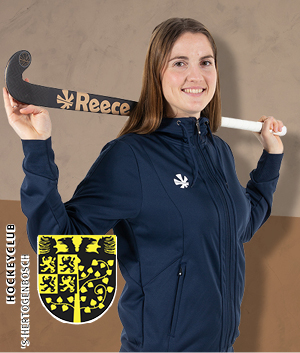 Hockeystick on the picture:
Pro 190 Skill

Which qualities make you a good player?
My insight into the game and my technique. I have a central function and my role is to launch other players with the right pass and also to keep an eye on the defense.

What is your favorite exercise during your training?
Training games in constantly changing composition. The trainer calls ‘one to one!’, ‘four to two!’ and so on. I like it when it is so dynamic!

What is your favorite hockey stick and why?
That's the Pro 170 Skill. I need a stick that gives a lot of ball control and with which I can give hard passes. Both very important in my position, because you have to be ball-solid and be able to pass quickly.

From which hockey player did you learn the most?
Janneke Schopman was my trainer in the juniorteam and I also worked with her in the first team. She can explain everything very practically and make it logical.

Do you have any rituals before an important game and if so, what are they?
I have few rituals. I prefer to get into the real focus for a match as late as possible, otherwise I get too nervous. However, I always eat warm oatmeal with banana for a competition.

What do you like to do in your spare time?
I am studying Organizational Change and Consulting at Erasmus University. I also enjoy going to the cinema and find spending time with my boyfriend, friends and family very important.

What is the most memorable moment in your career so far?
We won gold at the World Cup in The Hague, that was very special. Such a big hockey celebration is very unique in the Netherlands. But of course the Olympic Games also have a special place, even though the result was not gold. Living in a village with the best athletes from all over the world is a bizarre cool feeling! So I choose two haha!

Do you have any ideas about your life after hockey?
I would really like to travel a year with my boyfriend. And perhaps hockey in Australia.

Which hockey player do you admire and why is that?
I think Florian Fuchs is a very good player. So agile and he can both give brilliant assists and score. In addition, he comes across as modest and I appreciate that. Really a team player!

What would be your best advice for young hockey players?
Lots of practice and play because you like it! Fun and joy are ultimately the most important, even if you play in the Dutch national team.